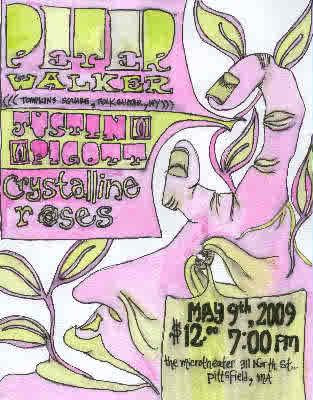 From WIKI...
Walker was born in Boston, MA in 1937, into a musical family, and began to play the guitar from an early age. He committed himself to touring and public performance from 1959 onwards, becoming a fixture of the Greenwich Village folk scene of the mid-'60s (during which period he became particularly close to Sandy Bull and Karen Dalton). Over the same period, Walker's attendance of a Ravi Shankar performance in San Francisco saw him embrace extended periods of study of Eastern raga under both Shankar and Ali Akbar Khan. Through mutual Boston associates Walker also developed a strong friendship with LSD pioneer Timothy Leary, becoming music director at Leary's Millbrook estate in 1965.

Walker's debut LP Rainy Day Raga was released by Vanguard Records in 1966, followed by the release of Second Poem in 1968. Walker diverted his attention away from public performance and towards family life at the start of the 1970s, but maintained a commitment to study of his instrument, focussing particularly upon Flamenco. In 2007 Walker was coaxed out of this semi-retirement by Joshua Rosenthal of Tompkins Square Records, for whom he recorded four new pieces to be set alongside musical tributes from younger admirers including Jack Rose, James Blackshaw, Steffen Basho-Junghans and Sonic Youth's Thurston Moore on the 2008 collection A Raga for Peter Walker. A full album of new material, Echo of My Soul, was released by Tompkins Square later the same year. These releases were supported by extensive touring and live performance, sparking a renewed level of interest which culminated in a recorded session for Stuart Maconie on BBC 6 Music, and an extended interview on BBC Radio 4's flagship early morning current affairs show The Today Programme.